In gratitude for a large endowment bestowed upon  the Research and Education Foundation of the American Head and Neck Society, the Foundation established the Jatin P. Shah Symposium on Clinical Controversies in Head and Neck Surgery in 2006.  Since then, the symposium has been a much anticipated and well-regarded panel at every annual meeting.  The focus of the symposium follows along the lines of clinical controversies. 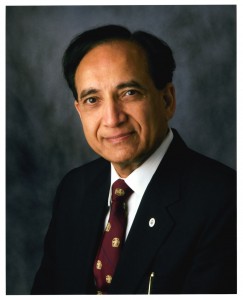 Professor Jatin P. Shah graduated from the Medical College of Maharaja Sayajirao University in Baroda, India, where he received his basic  training in General Surgery. He completed a Fellowship in  Surgical Oncology and Head and Neck Surgery at Memorial Sloan Kettering Cancer Center, (MSKCC) and joined its full-time faculty in 1975. He is Professor of Surgery at the Weil Medical College of Cornell University, Chief of the Head and Neck Service and Leader of the Head and Neck Disease Management Team, and holds The Elliott W. Strong Chair in Head and Neck Oncology at Memorial Sloan-Kettering Cancer Center in New York City.

Professor Shah has been the recipient of numerous awards from various parts of the world, including Honorary Fellowships and Doctorates from the UK, Belgium, Greece and Australia.   He was the recipient of the  Blokhin Gold medal from Russia and  the “Ellis Island Medal of Honor” from  the United States.  He was  named the Most Distinguished Physician in the USA by the American  Association of Physicians from India in 2011. He has been listed in the “Best Doctors in America” directories 54 times for the past two decades. Dr. Shah is also an honorary member of several head and neck societies in Europe, Asia, Australia, Africa and South America.